Most Effective Marketing for the Pre-Published Writer 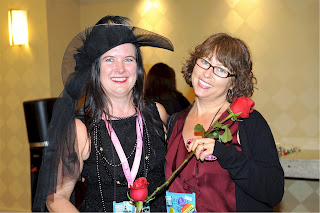 This is me and the lovely, sadly former, Word Whore at the Kensington Author Cocktail Party at the Romance Writers of America (RWA) National Conference a few weeks ago. Amusingly, James Tuck, another former Word Whore was also in attendance, but I didn't get a pic with him. Too bad, because he's got to be twice my size - it would have been a funny photo. At any rate, it was practically a Word Whores conclave and, as we all know that the Word Whores have exceptionally high standards for wit, insight and sheer ballsyness (yes, that's a word, Blogger), that makes for great conversation.

At any rate, this week’s topic is Word On the Street: Most Outrageous (Yet Effective!) Marketing Plan For The Not-Yet Famous. Since there’s an exclamation point in this, I feel quite certain Carolyn suggested this topic, before she had to move on to less busy pastures. For some reason, when I first read this topic, to mull over my take on it, I understood it as “not yet published.” I see now that it’s “not-yet famous,” which is, um, pretty much every damn one of us who isn’t Stephen King, Stephenie Meyer or J.K. Rowling.

But that’s neither here nor there and I shall let my fellow whores weigh in on their takes.

I’m running with the “not-yet-published” aspect, not just because that’s what I mentally prepared, but because I think I have good advice.

Of course, I always think that.

My advice even counts as outrageous, because I think it’s something that doesn’t occur to most people:
Volunteer to be President of your local or special interest writing chapter.

Now, maybe this advice is tailored more for the romance writers, because RWA has local and special interest (read: online) chapters. Organizations like Science Fiction Writers of America (SFWA), while they have informal regional gatherings, don’t have chapters in the same way. Even if they did, SFWA doesn’t embrace the pre-published authors in the same way as RWA does, so the point is pretty much moot.
So, here’s my story. Back in the day (2008), when I was shopping the book that became Rogue’s Pawn, I joined RWA for one reason and one reason only – so I could attend the RWA National Conference and personally pitch to an agent and editor. I was naïve enough then that I truly believed that this was all I needed to do to sell my book.

(Yeah, you can take a moment to shake your heads sadly.)

I knew Not One Person there and, after I pitched and got my requests, I celebrated at the bar by myself with a glass of champagne. Sad and pitiful, I know. But I felt okay about it because I knew the agent and editor would read my manuscript, offer me a lucrative, multi-book contract. Then, I figured, I’d return to the conference the next summer – because the enormously high quality of the key-note and awards ceremony speeches, along with the workshops and panels had so impressed me – as a legit romance author and make friends then.

It could have been the champagne.

Of course, we all know how this story turned out. Both the agent and editor, to my astonishment, passed on the book. At loose ends, I took a couple of online workshops (I lived in the wilds of Wyoming at the time) and looked for help. One gal suggested I join the Fantasy, Futuristic and Paranormal (FFP) special interest chapter (online, naturally), for advice and support. Best advice ever.

Shortly after I joined up, calls went out for a new board. No one stepped up to be President and the pleas for a volunteer grew increasingly strident. I finally said, hey, total newbie here, but I’m willing, and they snapped up my offer with scary speed. I ended up serving two years as Prez of FFP and I still sit in on board meetings as Past President, for continuity.

The astonishing part was when I attended the RT Booklovers Convention the following spring and then the next RWA Conference. Suddenly, everyone knew who I was! The published members of FFP hugged me on sight, took me under their wings and introduced me to their agents and editors. They, and other agents and editors, took me more seriously. When I pitched, we started out talking about FFP and what the chapter did. Serving on that board gave me an entrée that I’d lacked the previous year. I met my first critique partners (CPs) through FFP, several of whom are still my CPs and good friends today.

Even now, some of my best connections are ones I made by serving as President of that chapter. Because I gave to them, all those wonderful people wanted to give back to me.

And it’s made all the difference.