Scenes and How They Do and Don't Work in Novels 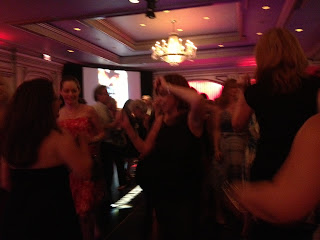 That picture is a bit blurry, but that's Nora Roberts rocking it out on the dance floor at the Harlequin party a the RWA National Conference. She is so wonderful in so many ways.

So this week's topic is Scene Goal: Why YOU Should Have One (Pantsers Beware!). No doubt it was KAK, calendar Nazi and avowed pre-plotter who added that snide addendum for Pantsers to beware. No doubt directed at me.

But it's interesting, having just come back from the convention, and hearing so many amazing workshops on craft and business. So many writers talked about various approaches to writing that involve blending of plotting and pantsing that it makes me think there are very few of us - if anyone - who does all of one thing or the other.

The whole idea behind making sure that you, as the author, have a goal for every scene is to keep the writing tight, focused and moving forward. The primary definition of a scene comes from theater, as so many of our writing craft concepts do.

Thank you ancient Greeks, yet again!

So a scene is, first and foremost:


1: one of the subdivisions of a play: as a : a division of an act presenting continuous action in one place b : a single situation or unit of dialogue in a play <the love scene> c : a motion-picture or television episode or sequence

In theater they are usually delimited by the entrance and exit of characters, because that dynamic movement is such a driving force for a stage play. Many movies have adopted the sense of a scene break - moving fast from one visual to another - to drive action forward. In network TV, scenes are broken up by commercials.
This can be less clear in a novel, because characters don't necessarily physically come and go, conversations and actions may flow more seamlessly from one point to another, and there are no commercial breaks. (We hope!)

People who use screenwriting models to structure their novels tend to move scene by scene. However, though I use the Three-Act structure and find it very useful, I rarely think in terms of scenes, or scene goals. This is not because I write for discovery, pants, mist or whatever you want to call it.

It's because I'm a character-driven writer.

See, the common wisdom - and it's generally good information - is to follow the Goal-Motivation-Conflict model. This largely comes from Debra Dixon's book on the topic, which many writers, especially new ones, seem to like very much.

It does nothing at all for me.

To me, characters are real people. They're complex, which means they're muddled. It makes a clean story for a character to have a single goal for every scene, to be driven by their motivation to overcome the conflict. We used this in theater all the time. But that's only the most fundamental level. Do any of us have only one goal or motivation at a time?

Think about yourself, right at this moment. You're reading this post. What's your goal? Your motivation? Is there a conflict? Maybe not and you reading this wouldn't make a very good scene or story. But, placed in the larger context, reading this might be part of the goal to be a better writer, motivated by your deep-seated dream and the desire to overcome that last rejection.

But, if I'm writing your story, I want to show how you're feeling, whether you think this makes sense or not, and then throw in a symbol of whatever is truly holding you back - that maybe you don't even realize. You start thinking about maybe playing Solitaire instead or your crying child comes in saying you don't pay enough attention to her, or your spouse grumbles about wanting you to cook something.

What's my goal for your scene?

Not a neat tick on the outline. Not an easily encapsulated 1, 2, 3. Instead I'm painting one piece of a puzzle. Hopefully by the end, it will make for a complete image.

I suspect this is the heart of pantsing. Not that we don't pre-plot, but that we don't always have a trajectory that can be mapped like a vector equation. Maybe we're the impressionists of the writing world. The rules matter less to us than the FEEL.

In fact, one of the best workshops I went to at the conference was about intensifying emotion. Tanya Michaels gave us many great examples of how some great books do this. Most valuable to me, she said "if you can make your reader feel one emotion, you can make them feel all the emotions." Loved that.

I suppose what I'm getting at is, not every emotion has a goal. Sometimes a scene is there just to create a mood. Perhaps one could argue with me that creating a mood IS my goal, but I don't always know that.

And I don't think I have to know.

But then, I'm happy in the misty worlds.