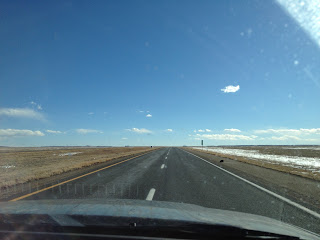 This is the photo I took when we drove back into New Mexico, after a road trip up to northern Wyoming. We lived in Wyoming for over 20 years and going back in February wasn't high on our list. But there was an illness in the family and we did what we needed to do.

I took a series of road shots that day, documenting the journey from north to south. 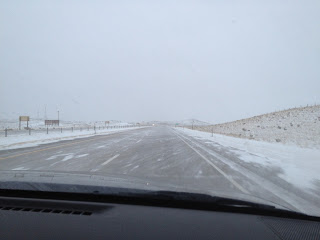 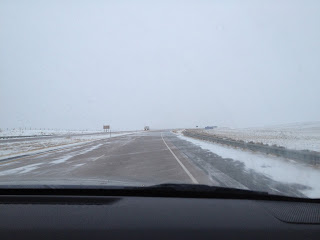 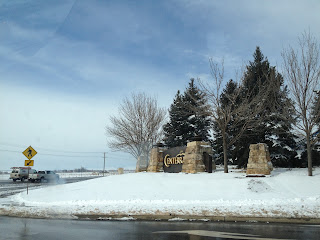 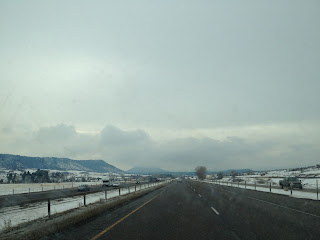 Once the roads cleared of snow and ice, then of city traffic, our speed increased. Until we hit blue skies and sunshine - then we rocketed home.

I guess the message here is obvious: to go faster, clear stuff out of the way.

I'm amused that this week's topic is  Attaining Warp-Speed: How do you increase productivity? I can't be the only one who reads "warp speed" and sees the stars going from pinpoints to blurs of light. Warp speed is awesome. It saves you from the Klingons and the Romulans. It gets you to that next planet in a few days instead of a few lifetimes. Who doesn't want a Dilithium Crystal of their very own, to catapult us from deadly dull impulse power to WARP SPEED??

I hate to tell you this - and I hope this isn't a spoiler - but faster-than-light travel is still fiction.

Us flesh and blood beings are still relegated to the laws of the physical universe. Which means getting in shape and staying in shape.

If you read my personal blog, you know this is one of my THINGS. I'm a believer in the gradual improvement, in increasing endurance gradually.

I come at this from the standpoint of the decidedly non-athletic.As a major bookworm and a skinny girl, I didn't play sports games with other kids. When I got to school, I'd never learned any of the athletic skills that made you popular in gym class. I tried (or was forced) to participate, and ended up doing badly because I'd never learned how to throw a ball. When you attempt something and everyone yells at you for screwing up, failure becomes a self-fulfilling prophecy. After that, I never learned to train my body because I didn't want to.

Until much later in life. I finally got serious about my slowly increasing weight. I didn't want to follow in the cankled footsteps of the obese side of my family. With a reason beyond trying not to get yelled at, I learned how to do things like run and lift weights. I started out at pitiful levels and worked my way up. It didn't matter how fast and fabulously the glossy, gazelle-like woman on the next treadmill ran, I had to work my way up via gradual increments. If I took time off, I had to scale back and work my way back up again.

If I didn't, I'd overdo - making myself sick, sore and miserable. Worse, I'd lose motivation.If I wanted to make sure I'd go back to the gym, the best way was to leave it feeling good.

These are basic animal-training techniques, right?

So, I'm sure you're all cleverly following my analogy here. It works the same way for me with increasing word count. I believe in the daily exercise. Establish a pattern and stick to it, then gradually improve my endurance and performance.

One way I've begun to look at this is by tracking my cumulative word counts, along with the daily ones. Some of you may have seen these charts on my personal blog on Friday (teach me not to look ahead to the Word Whore topic of the week), but I'll show them here, too. 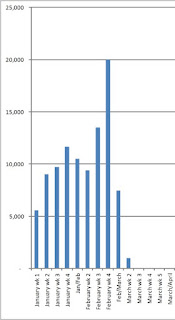 These are my weekly cumulative word counts for 2013. I only started tracking weekly numbers in January, so this is a limited perspective. The partial weeks throw it off a bit, but I like being able to see the trend. (Actually, I replaced the chart with a better one, that combines the last and first weeks of each month.) I look at this every day and hope to see that I improve. It was cool to see my weekly count of 20K, following a big push. I can also see that I pay for it the following week. This doesn't surprise me, really. I went to grad school with people doing interesting work with Olympic athletes, studying patterns of training and - more important - over-training. A recovery period is necessary to regenerate the ability to perform. 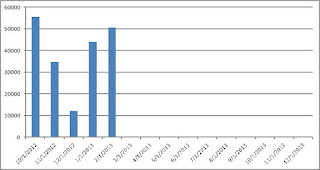 These are my monthly cumulative word counts, which I've been tracking since October. December was a light month because I was doing a lot of revisions and back and forth edits with a couple of my editors. I also took time off for the holidays and to refill the well. What was important to me was to get cranking again in January. This chart helps me see I did quite well, getting back into shape. At the time I felt creaky - sluggish and over-celebrated. But I gradually improved over the month (as the weekly charts show) and did even better in February. I'm really interested to see how I do in March.

I joke about this being like animal-training, but that's a fair analogy. We have to treat ourselves as we would a treasured pet - with both love and discipline. You won't win the Triple Crown with a horse exhausted from too many races. This is partly why I take one day a week off from writing. From day job, too. It's my day to play - and very necessary for me to hit the work again with energy and enthusiasm.

Warp speed would be nice and I'll never stop admiring those gazelle-like women running at 7 mph. But I'll trot along at my 5 mph, making sure to reward myself for reaching those personal bests.