How I Learned to Quit Worrying and Love Rejections 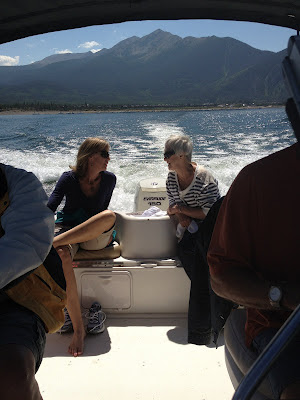 I'm up at Lake Dillon with the family, celebrating multiple birthdays this weekend. Beautiful, gorgeous, wish you all could be here!

This week's theme is the best rejection we've ever received. For those of you who haven't played the submission game very much, or for very long, the concept of a "best" rejection might sound foreign. But truly this is a thick skin thing. Once you get over the sheer pain and awfulness of having your work rejected in the first place (and *always* remember that the rejection of that particular piece of work, not all your work, and certainly not you, yourself), you begin to learn the variety in the responses. And this is a very important lesson to learn: not all rejections are the same. Not even close. Better, you learn this:

Some rejections can be the opportunity you've been waiting for.

I mean this in all seriousness. Once you can see past the "no" and recognize the opportunity offered, you've attained an important level of professionalism as a writer.

So, I can offer two examples of the best rejections I've received.

The first, way back in the mists of time, was in 1996, when I was writing and submitting essays. That year, I took a class from a visiting writer at the university, Essays on Self and Place, and I wrote an essay called "Inheritances." This class hooked me up with some wonderful writers in the community, who invited me to join their critique group, and firmly set my feet on the path that eventually led to the publication of my essay collection. At that time, though, I was dipping my toes and trying to find out if I had an ability at all. One of the gals in the class had graduated from the Iowa Writing Circle and her good friend, Jo Ann Beard, had just been published in The New Yorker and scored a book deal.

Jo Ann gave me the info for her editor at The New Yorker, let me drop her name and I submitted "Inheritances" to her. Now, gather 'round children, because I'm going to tell you of long-ago days, when all of this occurred on something called "paper" and communications went via "mail." Some of you know this as "snail mail" these days. So, you'd mail your query letter and essay and include a self-addressed stamped envelope (SASE). Thus, rejections arrived in an envelope you'd addressed to yourself. If you were lucky, there was a letter inside. Often it was just a slip of paper, clearly cut from a sheet with 20 or 50 of the exact same "not for us" answer. An envelope was always bad news, but the acceptances came via phone call or email.

So, when my envelope came from the New Yorker, I knew it was bad. And from the silhouette, I could see that it was worse - not a full sheet of paper. But, when I opened it up, the note was on a piece of cardstock with a New Yorker cartoon on it and a HAND-WRITTEN note. In those days, a hand-written response was the holy grail. Better, this was from the ACTUAL EDITOR - not some intern tasked to cut 20 to 50 stock rejections into strips and throw them into envelopes. She said to me, and I'm quoting from memory, because I bet I read it a thousand times.

"This is a lovely essay, graceful and moving, but not quite strong enough to make a sticking piece for us."

And she wished me luck, etc, and invited me to submit more work to her. From this I learned that I could, indeed, write. It may seem paradoxical, but that I came close enough, with one of the first essays I ever wrote, to elicit that praise and an invite to submit more... well, it was crucial to me.

I never did get pubbed in The New Yorker, but I kept trying.

The other rejection was from one of my editors. She rejected me twice, actually. Both were R&Rs - revise and resubmits. They're rejections, yes. "No, I can't take this as is." With the addition of "But if you fix these things, I'll look again."

Amazingly, she tells me that a very small percentage of authors actually do revise and resubmit.

Update: She says My rate is about 50%,including ones I do for my authors too. If I just look at slush (including the first time one of my authors subbed), it's around 60% who don't resub, 40% who do. Sad, since it always takes me hours to do those RR letters.

I've heard other authors say that they won't devote the time to "writing on spec," since there's no guarantee the revision will be accepted. They prefer to try other presses, which usually means going down to less prestigious ones, to see if they can get it published as is.

All I know is, both of those stories were accepted after I revised them. I was lucky that Deb is an insightful editor and I liked her suggestions. And now both of those stories are part of ongoing series with Carina. For one of them, I was able to pitch the novella on a partial and synopsis - based in part on the fact that Deb knows I can and will take editorial direction.

If that long-ago editor from The New Yorker had sent me an R&R? I totally would have done that, too.