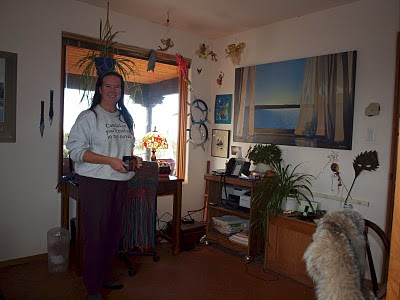 I confess I'm big on writing rituals. In fact, if you read my regular blog, Love, Power & Fairytale Endings, you've probably read everything I have to say on the topic already, so you could skip today's blog.

My favorite religious studies professor in college, Professor Hadas, told me that once - that I'd already learned everything he had to teach and he would not allow me to take any more classes from him. He gave me a list of other professors to learn from. As I progressed through life, that assertion of his became one of the qualities about him I most admired. Many people tend to want to keep their students locked to them. They want to be forever the one with more knowledge, with a circle of admirers. One teacher I knew never released his students. He forever told them they'd only scratched the surface, stringing them along, to keep them by his side.

Professor Hadas described himself as a non-practicing Orthodox Jew. If you don't know much about Orthodox Judaism, this is a deliberate joke. Orthodox Jews believe in practice overall. Where many Christian groups say you need only have faith and the rest doesn't matter, the Orthodox Jews say you must do the practice and it doesn't matter what you believe. They hold that if you say the prayers and do the rituals, you create a space for faith to fill.

And believe me, the Orthodox Jews do a lot of prayers and rituals.

Everything they practice, from the 112 prayers they say every day, starting when they wake and finishing when they go to bed, to their dietary restrictions to the special clothing they wear, is designed to remind them of what is most important to them, which is the presence of Yahweh.

The crucial aspect of this is putting your attention on what's important to you. That's ritual in writing comes in for me. Writing is important to me. But I've had to work to make it important in my life. It's very easy to let all the busyness of life overcome writing time. We've all heard writers complain about how their day was so busy they got no writing done. What they're saying is "everything else I did today was more important to me than writing."

Ritual is what creates the importance. It builds the wall around the space where writing happens - and defends it against everything that would love to eat away at it. So, I have things that make me think about writing on my study walls and on my desk. I sit down to write at the same time every day, wearing the same clothes. That's why I posted this not flattering photo of me, so you can see. I start with the same music that I've been writing to for years.

These rituals remind me that this is important to me. They cue me that now is the time to sit, to be quiet, to turn off the phone and the emails and the twitter and only write. This is a form of prayer for me. The Taoists hold that only when we concentrate with singular focus on something, are we whole in ourselves.

Plus I get to make up stories.

I may not have learned everything Professor Hadas had to teach, but I did learn this. And it's been one of his greatest gifts to me.